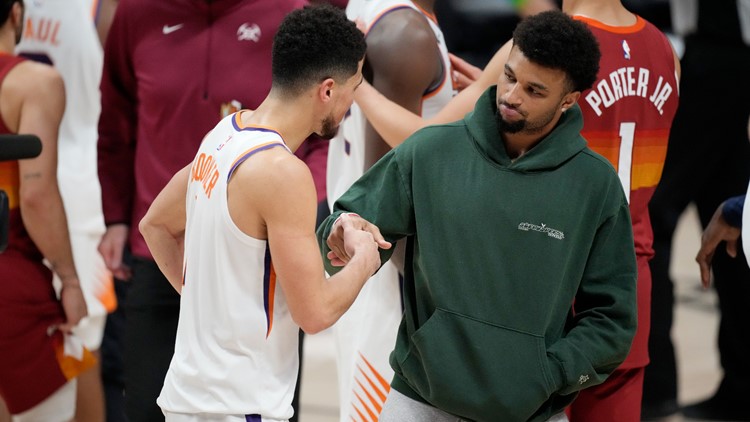 Nikola Jokic steered his team through a trying season marked by a rash of injuries, most notably to fellow star Jamal Murray, who tore his left ACL in April.

DENVER — The Denver Nuggets’ season came to an ignominious end with Jamal Murray looking on from the bench and newly crowned league MVP Nikola Jokic watching from the locker room.

The Phoenix Suns completed their second-round sweep with a 125-118 win Sunday night in Denver, holding off an inspired effort by the Nuggets following Jokic’s stunning third-quarter ejection.

Long have the Nuggets chafed at the lack of respect and calls that Jokic gets, particularly this season as the 7-foot Serbian blossomed into the NBA’s runaway best player.

Frustration boiled over 48 hours after Jokic humbly accepted the Maurice Podoloff Trophy that he dedicated to his teammates, coaches, trainers, front office and family.

Infuriated at no whistle for the contact on his one-handed runner that bounced off the rim with the Nuggets down seven late in the third quarter, Jokic gestured at the official before racing to Cameron Payne, whom he swatted across the face as he took a hard swipe at the ball.

That led Suns star Devin Booker to confront the Nuggets’ 7-foot big man, leading to a double technical. After the two were separated, the crew reviewed the play at midcourt as Jokic retreated to the bench.

“I thought honestly, they’re not going to eject me,” said Jokic, who hadn’t even been assessed a Flagrant 1 foul in 345 games and who isn’t known as a dirty player.

Jokic apologized to Payne before he was escorted through the tunnel.

To players across the league, the Joker’s bewildering ejection was a joke.

“A Flagrant 2? Wow.” tweeted Trae Young of the Atlanta Hawks.

Ja Morant of the Memphis Grizzlies chimed in, “playoffs. elimination game. give him a flagrant 1 and play ball man.”

Crew chief David Guthrie explained afterward that “the wind-up, the impact, the follow-through, the unnecessary and excessive contact above the shoulders into the face” met the criteria for a Flagrant 2.

The Nuggets played valiantly without Jokic but couldn’t extend the series.

“I wish we could have played them at full strength,” said Nuggets coach Michael Malone.

A year after leading the Nuggets to the Western Conference Finals in the Walt Disney World bubble in Florida, Jokic steered his team through a trying season marked by a rash of injuries, most notably to fellow star Murray, who tore his left ACL in April.

They also lost Monte Morris, P.J. Dozier and Will Barton III down the stretch.

Amid all those injuries — not to mention a jampacked season where virtually everyone got some rest along the way — Jokic was a rare everyday player, a big man who logged big minutes. He’s the only player to start all his team’s regular-season games in the last two seasons, being on the floor for tip-off all 145 times.

Despite that ever-changing cast around him, Jokic guided Denver to the No. 3 playoff seed in the West. Behind Jokic, the Nuggets went 13-5 after Murray tore his ACL on April 12 and he led Denver past Portland in the first round of the playoffs.

Michael Porter Jr.’s breakout season took an unfortunate turn when he tweaked his surgically repaired back in the second-round opener at Phoenix, and that proved one injury too many for Denver.

With their second scoring option at less than full strength, even Jokic’s best wasn’t good enough.

On the night he celebrated his MVP award, Jokic joined Wilt Chamberlain and Kareem Abdul-Jabbar as the only players with 30 points, 20 boards and 10 assists in an NBA playoff game. Yet, he apologized to his teammates for not doing more in Denver’s 116-102 loss.

“He was beating himself up because he’s striving for perfection and he knows with the injuries that we have and the quality of opponent that we’re facing that he needs to be phenomenal for us to have a chance,” Malone said before Game 4.

Jokic had 22 points and 11 rebounds in 28 minutes before his ejection Sunday night.

“Tough loss, tough way to go out,” Malone said. “I was thinking about this today, after we’d gotten Aaron Gordon, we went into L.A. and played the Clippers on April 1st and we beat them. At that point in time, I really felt we had a chance to win it all this year, I really did.”