Is Michael Gallup a part of the WR future for the Dallas Cowboys? 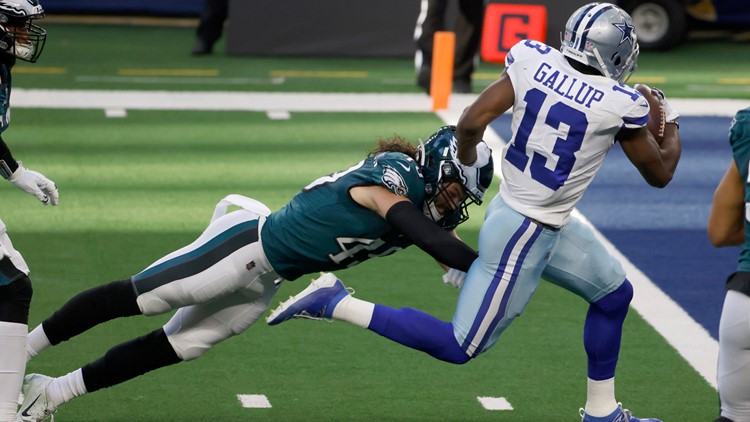 The Dallas Cowboys will enjoy a final season on the rookie contract of 2018 third-round standout wideout Michael Gallup before they have to make tough decisions.

DALLAS — Player A is entering Year 2 of a five-year, $100 million contract while Player B is entering the final year of a rookie deal and will no doubt earn a well deserved payday come 2022 free agency.

What if Player B, Michael Gallup, had more of a future with the Dallas Cowboys than Player A, Amari Cooper?

While it seems the Cowboys have their receiving duo locked up through 2023 with Cooper and recent 2020 first-rounder CeeDee Lamb, who also has a fifth-year option that keeps him under contract through 2024, the last year of Cooper’s deal, it may be more advantageous for the Cowboys to dump Cooper and give Gallup an extension when all is said and done following the 2021 season.

Cooper has been productive for the Cowboys with 224 catches for 3,028 yards and 19 touchdowns through 41 games since 2018. However, he will be 28 years old come Week 1 of the 2022 season, while Gallup will be 26. Never forget that the NFL is a young man’s game, Tom Brady notwithstanding.

Dallas can’t release Cooper without a price, but not one that the Cowboys couldn’t afford. If Dallas designated Cooper as a post-June 1 cut in 2022, they would pay just $2 million in dead money and get out of the final three years of his contract, which the Cowboys can then use to pay Gallup and have their receiving duo of the future alongside Lamb.

Gallup appeared on NFL Network’s “Good Morning Football” on Monday and played the consummate teammate and company man, stating that he wasn’t worried about going into the final year of his contract.

#Cowboys COO Stephen Jones told @1053thefan what he likes about Amari Cooper is he acts like he’s been there before when he has had success. pic.twitter.com/Y5HnLjEXQA

While Gallup can have the luxury of not worrying about the final year of his contract and his future, Jerry Jones does have to consider it as the rest of quarterback Dak Prescott’s weapons are kept intact.

Through 46 career games with the Cowboys, 35 of which he has started, Gallup has provided Dallas with 158 catches for 2,457 yards and 13 touchdowns. The Cowboys must choose wisely as their decision will be between a proven veteran with more sand at the bottom of the hourglass than at the top, and a proven commodity with potential still within reach, one that could be had on a cheaper deal.

Do you think Gallup will carve out a bigger role with the Cowboys in his fourth season? Share your thoughts with Mark on Twitter @therealmarklane.