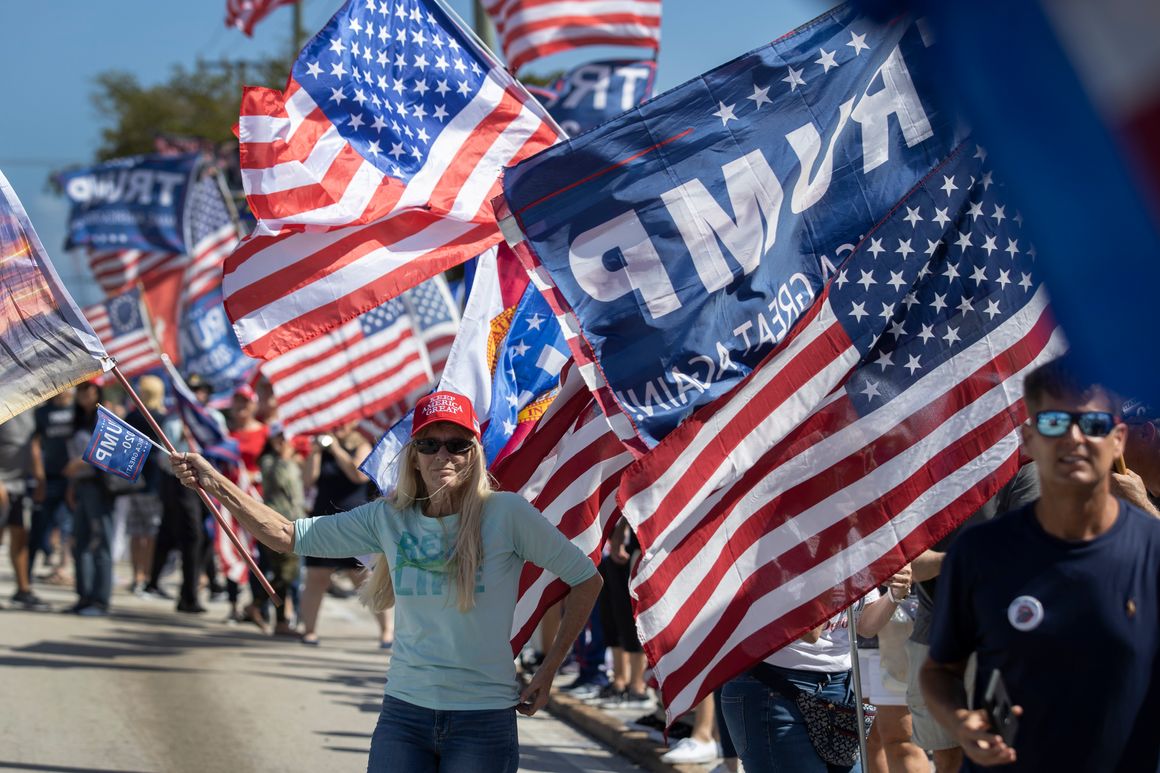 They shouldn’t be so sure.

First, beyond a few spats that make headlines, it’s getting harder to detect any serious division among rank-and-file Republicans. In Congress, and at the grassroots, the dominance of Donald Trump over the party is more or less total. The small handful who denounced the former president for his massive lies about the election and his seeding of an insurrectionist riot are now either silent, or have embraced a mealy-mouthed argument for “election integrity.” The same state officials who pushed back against Trump’s attempt to overturn November’s results have embraced a series of restrictive voting measures ostensibly designed to combat non-existent “fraud,” all aimed at hobbling voters inclined to vote for Democrats. Mitch McConnell, who denounced Trump’s behavior in high-minded tones in the aftermath of the riot, also—on the exact same day—voted to exonerate him of wrongdoing.

Second, and more significant, history is littered with times that critics on the left, and in the pundit class, were positive the Republican Party was setting itself up for defeat by embracing its extremes … only to watch the party comfortably surge into power. This time there are structural advantages as well: Given the Republican advantages in the House (through gerrymandering, and the statistically “wasted” votes in landslide Democratic districts), in the Senate, in state legislatures and in the Electoral College, a Trump-dominated Republican Party is a strong contender to take the White House next time around. And, contrarian as it may seem, the lockstep devotion to the former president may actually enhance, rather than lessen, its chances. What we’re seeing isn’t a civil war. It’s a purge, and there’s every reason to believe it will work.

This is not the conclusion you’ll reach if you follow much of the mainstream press. A New York Times story on Saturday about Trump’s hold on the GOP quoted former Rep. Barbara Comstock, former Sen. Jeff Flake, GOP consultant Sarah Longwell and Republican strategist Scott Reed, all warning of the political danger of a Trumpcentric party. These are estimable public figures, none of whom remotely speaks for the Republican base. For the past few weeks, much media attention was focused on Michael Wood, the 34-year-old veteran running for a Texas seat with a message that the Republican Party had to move away from Trump. He wound up finishing ninth, with 3 percent of the vote.

For a broader measure of just how one-sided the “civil war” is, you don’t need to stop at the behavior of House Republicans, who are poised to defenestrate Liz Cheney from her leadership post, and who overwhelmingly voted in January to block the certification of electors. A far better picture emerges when you consider the behavior at the grassroots. From one end of the country to the other, state and local Republicans have spoken with one voice.

In Oregon—once the home of moderate Republicans like Mark Hatfield and Robert Packwood—the state party declared that the January 6 pro-Trump insurrection was a “false flag” operation by antifa and Black Lives Matter supporters. In Arizona, where Sen. John McCain once stepped across the aisle to defend the patriotism of Barack Obama, the state party censured his widow, Flake and Gov. Doug Ducey for refusing to embrace the “stolen election” fantasies of Trump. More recently, the GOP-controlled state Senate turned 2.1 million votes from Maricopa County over to an “auditing” firm run by hardcore Trump supporters; the firm is now inspecting ballots for “bamboo fibers,” the better to prove that thousands of ballots somehow made their way from China into Arizona ballot boxes.

In state after state—Louisiana, North Carolina, South Carolina, Illinois, Kentucky, Nebraska, Michigan, Washington—local Republican parties are rallying around the ex-president, and censuring those who dare to critique him. If there is any counterweight to this mass impulse, if there are signs of any activity on the other side of this “civil war,” it is happening at a level so low as to be invisible.

From a distance, this all looks somewhere between absurd and suicidal for the party: Pledging total allegiance to a divisive, 74-year-old one-term president who lost his reelection bid by 7 million votes, and lives in a bubble of people telling him he won. He could, and seemingly still can, remove critics from the political stage with the flick of a finger. Should that be seen as a political calamity for Republicans?

If you have a long enough memory, or a grasp of political history, you can point to a moment when the GOP was, indeed, slightly too extreme for American voters: Presidential nominee Barry Goldwater went down to a massive defeat in 1964, in part because the then-significant moderate-liberal wing of the party refused to support him.

But that may be the last time the Republicans truly regretted alienating their moderates. In 1980, Mary Crisp stepped down as co-chair of the Republican National Committee after the party abandoned its support for the Equal Rights Amendment, and put a more or less total abortion ban in its platform. To the pundit classes, her departure was seen an obvious sign that Ronald Reagan’s nomination would drive the then-significant core of moderate and even liberal Republicans away from the ticket. Spoiler alert: The party united behind Reagan and won 44 states. Crisp’s dramatic departure is now a footnote, at best.

For establishment Washington, it was a genuine shock to the system. When 1980 began, an A-list New Year’s gathering in Washington held an informal poll on who would win the presidential election that November. Not a single partygoer chose Reagan. If the collective wisdom of Washington could not imagine the election of a candidate who was twice been elected to lead the largest state in the union, it was beyond the pale in early 2016 to imagine a crude, bullying, recreational liar with the political knowledge of a hamster ascending to the highest office in the land. He would not survive the first in-depth investigative news probe; he would not survive the first primary; he would be turned back at the convention; he would go down to humiliating defeat in November.

And indeed, his ascent triggered what looked like a civil war within the party. Four of the previous five Republican presidential nominees refused to endorse him; a fifth of GOP senators did the same. But Trump won 88 percent of the Republican vote. And after four years of unhinged government, after credible evidence of obstruction of justice, after a pandemic death toll directly linked to presidential indifference and ignorance … Trump won 12 million more votes than he had four years earlier, with the support of 94 percent of Republican voters. That’s slightly better than Reagan did in his 1984 landslide reelection. A shift of 42,000 votes in three states would have thrown the contest into the House of Representatives, where the ludicrously anti-democratic one-state-one-vote rule would have put Trump back in the White House. (Further—had David Perdue won a quarter of one percent more of the vote in the Georgia Senate contest last November, he would have avoided a runoff and the Senate would now be under GOP control).

And despite Trump’s overt attempt to subvert the election, despite his feeding the flames that nearly led to a physical assault of the vice president and speaker of the House, the Republican Party has, after a few complaints and speed bumps, firmly rallied behind Trump’s argument that he was robbed of a second term. A remarkable 70 percent of self-identified Republicans say Biden is not the legitimate president. To prove their commitment to Trump, state legislators, governors and other officials enact laws based on that premise. Rather than holding up their end of a civil war, the objectors are being stripped of their jobs, or leaving the party entirely.

Looking ahead to 2024, it’s hard to ignore the fact that the structural advantages that benefit the Republican Party—in House districts, in the GOP tilt of the Senate and Electoral College—are only tilting further in its direction, buttressed by new laws and regulations passed to make Trump and his followers happy. If Trump really runs, and the 2024 election results have roughly the same profile as 2020’s, it is far more likely that Trump would emerge the victor, given new barriers to voting and the purging of nonpartisan voting officials.

Now throw in the human factors, and imagine how a Republican House and Senate could refuse to certify politically unpalatable state results, thus throwing the election into the House, where the one-state-one-vote rule makes a victory for the Republican candidate probable.

The pattern is striking: if you want to survive as a Republican official, you will support the former president; if you support the former president, you will support laws that reflect his conviction that the election was stolen; if you enact those rules, you are making it more possible that he will win a second term. The party is talking with one voice; the voice is Trump’s, and it’s one that plenty of Americans are still perfectly receptive to.

Yes, there are those within the party who will resist: Cheney, Adam Kinzinger, blue state governors like Larry Hogan, former GOP Chair Michael Steele, who has been effectively divorced from the party for years. As nominal Republicans, they will win a significant share of coverage in the New York Times, and on CNN and MSNBC. But the idea that they represent one side of a major split within the Republican Party is a fantasy.

As a body, that party has embraced notions about the political process that would have seemed the stuff of parody a decade ago. Donald Trump Jr. was right, in his speech to the crowd just before the Capitol insurrection: this is Trump’s Republican Party, and it’s perfectly united in that conviction. To pretend otherwise—and to pretend that there’s an argument about what it stands for, or some kind of damaging fracture still ahead—is an act of delusion.